A Study of the Soul 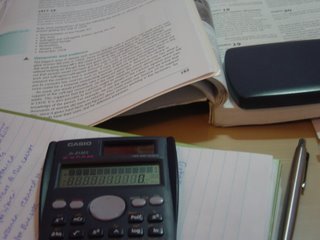 The moment that marked not only the end of my physics exam (which literally began with laughter) but also the end of 2 months and 10 days of what I would like to call hardcore revision: piles of notes (colourful, attempting to make themselves seem less grim); muscle cramps (the proof); and the occasional escape to the table tennis table with ma chère Maman (this has been much kinder to me than my dad's brutal tennis forehands), came and went, and didn't even bother to declare its presence as I'd imagined it would.
But surely it must have meant something? Shouldn't I have spontaneously begun jumping up and down and giggling madly... or at the very least made some indication of the fact the tension that had been crawling over me for the past few months had conclusively flown off (to be replaced by a smaller, more discreet version in the form of anxiety over my results)?
Has drowning my mind in the tumultuous blast furnace of undiluted study finally killed (er, reduced) my soul, leaving me unable to taste of the joys of the long-awaited summer?
A slightly stronger tinge of melodrama would have you think so.
I took off my school jumper yesterday with a sense of triumph. Had my brother had his way, however, such a historic act would have been accompanied by a more ceremonious ritual - "You're taking your jumper off? But... it's the last time you're ever going to wear it!" I was hot, so, like, whatever. And anyway - it's not like I'm emotionally attached to the fish-decorated acrylic weave.
Divulged at 7:34 pm

"the fish-decorated acrylic weave"
HAHAHAHAAAAA
that was a rather thought-provoking first blog.
loved it.
please do carry on.