Put on a happy face.

I was watching Kingdom of Heaven today. Can you imagine living in an era when the leaders at the very top of all power and command over two nations approach each other - with masses of soldiers visible over the shoulders of each - and decide on a truce for the sake of the people, and not glory? Doesn't it make you laugh, with admiration, to hear that one king would send his physicians to another, whom he would have called his enemy, realising he is a leper?

We all feel right and wrong as though it's ingrained in our souls. But still we cause each other harm. We haven't embraced our humanity... it seems to me that we're trying more and more to deny it, to blur its edges, to dilute black to pale grey. I've realised how much one needs to submit to one's humanity, over and over again, each day, every conscious moment requires one to acknowledge it with humility and respect. You see, it can't just be done in a whim. It takes consistent effort. Everything does, and yet I'm sitting here feeling inadequate. Being inadequate.

But my belief in God leads me to hang on to belief in man. All we really have to do is appeal to each other's better nature - the nature instilled in every human soul. I think we've got to aspire, not just dream. Dreams cause you to lose sight of the real world, and can be forgotten as soon as you wake up to see it.

At the same time, I understand how much I've got to embrace my beliefs - my faith in God. I've got to learn to deal with things, learn from things, and most of all, NOT to cry in front of the one who made me cry. Man, nobody warned me how tough it was to grow up! It was never like that in my dreams, you see. I have to face up to things that wouldn't be expected of me as a child, but I still think, or rather, I think because of this, that one must not forget the essence of humanity - the untarnished heart of a child.

(That reminds me - Finding Neverland is SUCH a good film. If you get the time...)

My purpose with this post was originally to talk about my trip to Nice, where I stayed at a French woman's appartment with two of my classmates and friends. Hah, I feel like I'm setting the scene for an enthralling tale...

Little did she know, the young'un with the scarf draped round her head, that that very cloth would irk Madame so... How was it possible that one could bear having to prepare vegetarian meals (as agreed) as well as having to look at the girl with offensively modest dress? Especially as one had protested against this very act of subjugation in 1968 or roundabouts? No, no, it was not! It was one's duty not to bear such intolerable contentedness with anything less than a threat contained in a warning on the second night of the little Muslim's stay.

"Do you have the right to go out at night? ... It isn't my responsibility, nor the school's, if anything should happen to you if you wear that headscarf outside ... Nobody else would accept you [into their home] knowing you wear that, you know ... they saw you at the airport [for the reader's information, I'm pretty sure there was 1 family out of 9 at the airport]. I'm just telling you for future visits [Oh yeah, it would just be dandy to come back to this again] ... I mean, I agreed to take you even though you were vegetarian [Very brave! Does it take a lot out of you to pluck sausages out of lentils and serve as is?] ... And if I had known that you wore a headscarf, I would have said no ... No, that's not discrimination - you must take that back - that is my choice! ... Now I don't know why you're crying, you girls are here to enjoy yourselves. Let's end this conversation."

She returned a moment later.

"If you took off your scarf... If you were a free woman, like me... then I would take a picture with you".

I am freer, because I won't be subjugated by you, either, Madame.

I've realised that I cried from anger. Gut-wrenching, breath-shaking anger. But yo, it ain't no biggie. I'm aight. But I feel so, so sorry for the poor girls who have to accept this as a part of life. And I feel so, so grateful that I live in a society where sharing and learning about differences is so important that intolerance is not tolerated.

God knows your pain. Gaining strength is a much greater ordeal than surrendering to it. Although the latter isn't what I intended, it's what comes across when you see a girl crying at being insulted. God, please give me and all those who believe in You strength of character so that we follow the example of the beloved Prophet, peace be upon him, and worship You in our every act. 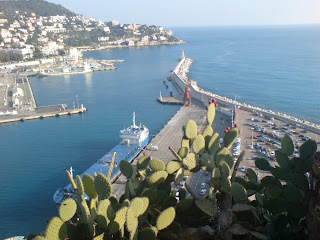 But hey - before you envisage me as thoroughly depressed (or depressing, as the case may be), I had lots of fun in Nice. It was a beautiful city - and in one little lagoon the sea was just silent when you got up close... so peaceful. Oh, and I bought a book that I read about in the newspaper on the plane there: Suite Française. I was reading the introduction recently and it told me that Irène Némirosky, the author, used to visit Nice during summer, and would go to the Hotel Negresco, which we used to pass almost every day, without a clue that a woman who wrote about the war's effects on human character and later died in Auschwitz used to visit it! And they were talking about Suite Française with high esteem on last night's Newsnight (9/3/07 - I've updated the post) - don't dismiss it too fast! 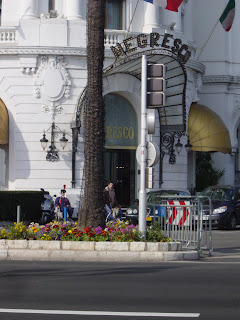 And my teacher was a very intelligent, sophisticated and knowledgable woman. She was born in Algeria, and lived there until she was 15. That is, until tensions between the Arabs and the French led her family to leave... but she wasn't the bitter type. She told us some of the Arabic words she knew, and described a friendly people. We talked about all kinds of things, and she made lessons truly interesting. What's more - the school said zilch about my headscarf, and the people were really nice to me. 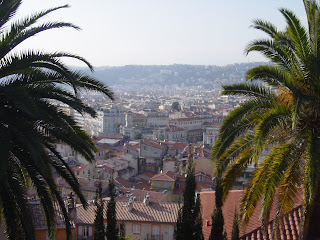 You know, it feels wonderful to be writing in English again. I like French, but English flows so smoothly whereas French keeps getting stuck and having to refer to English for the way out, and then ends up confused and unsure by the time it surfaces. Thankfully French seems to be getting to know its way around with time, but English has its own pleasures.
Divulged at 11:08 pm

I do very much admire your open, free spirited nature. The way you tolerate, like the way the previous pope used to. Toleration is the way.

We're all going to experience some lack of toleration...about something. The crucifix for example cannot be worn so explicitly.

And you're not alone with the way these french people have corresponded with you...the way they tried to deny certain signs of faith. It happens, because these people don't understand nor are they willing to open their arms and accept that we live by our different faiths, creeds, traditions, culture...

People of the jewish faith have experienced this, especially in France.

But you do have beautiful aspirations and an open mind.. heck, I'm catholic and yet we discuss things so well. We don't even think twice about our faiths and how it should affect anything. Sure, they'll be some disagreements concerning our own faiths, but we tolerate that and look for the things we both compromise on. It's amazing when you think about the level of tolerance we've managed to reach.

Of course, there'll be certain cultures where certain faiths, traditions etc are ruled out... But the way that, for example, the pope Jean Paul II tolerated all religions and faiths...

Stick to your guns, as Bon Jovi once said. Well, we'll find something else for 'guns'. ;)

Also, watch the way an angry french individual expresses how 'SCANDALEUX' something is... AT the beginning. XD

I agree. Jean Paul II was one cool dude.

(the latter part of the post is relevant to the discussion... but the blog's cool in general)

And of course I understand that others are going through this too... it's all horrible. What really struck me was that it wasn't just institutional (in my case not at all institutional) - but in the woman's home, she said to me that she would hide her cross and picture of Jesus (peace be upon him) that were on her necklace if she thought it would offend someone. It didn't offend me at all, but struck me as odd that she criticised me for wearing my scarf while making no gesture of hiding her cross...

Surely if those were her values she would have practised them?

I agree wholeheartedly that tolerance is what we need to use to bring us together. We may have different beliefs, but we are all human and need to respect and be respected.

Perhaps she thought that you would take it off in France since you were miles away from the evil overbearing father that forces you to wear it! It couldn't possibly be your own choice!

As indignant as I ought to be, the probability of her having such warped views makes me want to laugh.

But I still have this eerie feeling that she detested the women themselves who chose to cover up - as though they were being disgustingly self-righteous, or offensively modest.